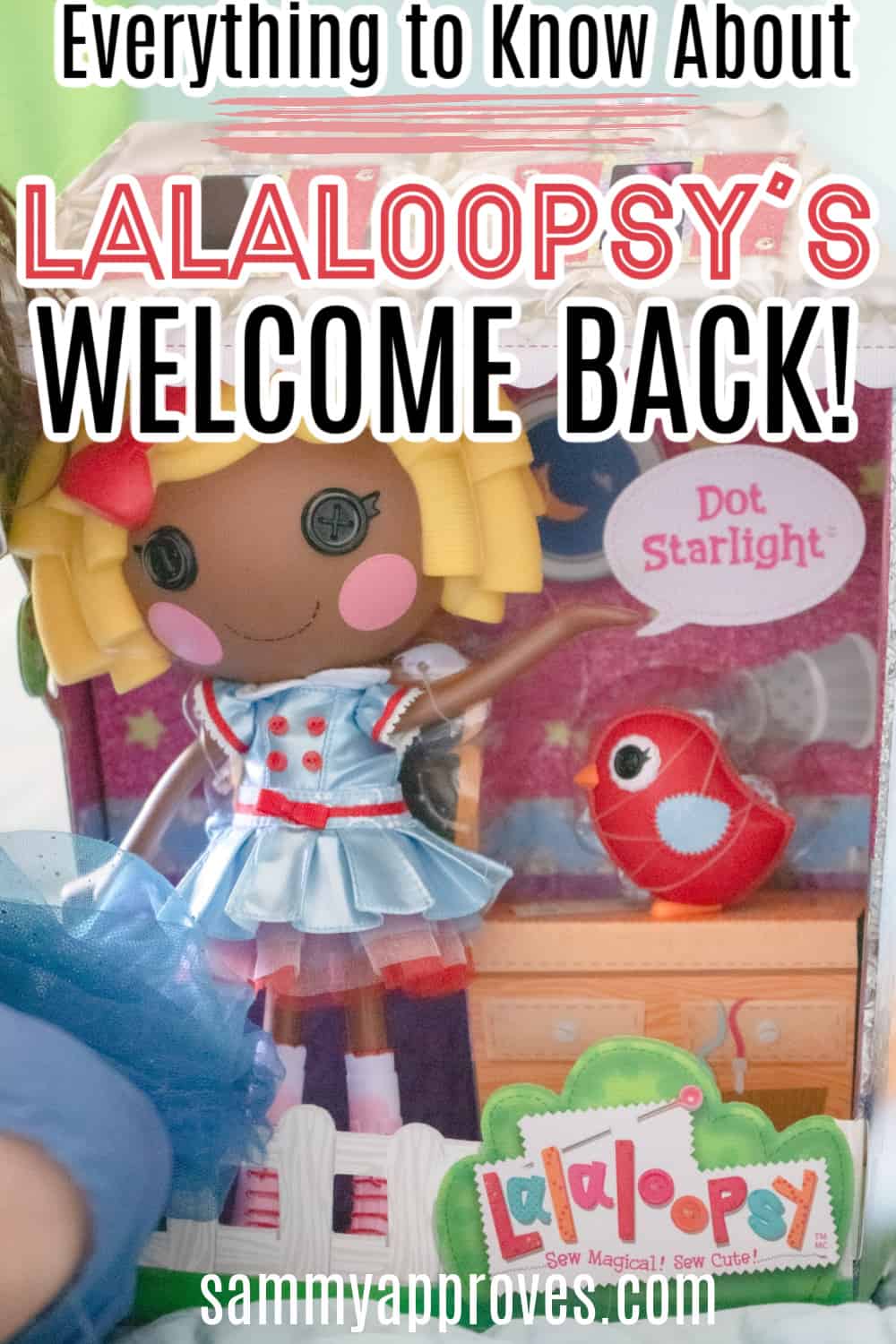 Have you heard? Lalaloopsy is back and we are sew excited for these cute dolls to be back on the shelves!

My daughter was 3 years old when Lalaloopsy were last released in 2018 and she loved them so much. We watched the shows and she would carry her Lalaloopsy dolls everywhere.

She’s 6 now and was really excited when I told her they were back!

Read on to find out more about Lalaloopsy dolls and get a sneak peak of the new dolls before they hit shelves in August!

What are Lalaloopsy dolls?

Lalaloopsy dolls have a sew cute story! They were once rag dolls who came to life when the last stitch was sewn.

These dolls first came out in 2010 from MGA Entertainment and have only grown in popularity since their release.

Each Lalaloopsy doll has it’s own character and personality. Their personalities are drawn from the fabric used to create them. I love how these cute stories help grow kids imagination and creativity!

Your kids can play and explore their creativity with their Lalaloopsy Doll Boxes. Each box is a playset on it’s own that matches the personality of the doll that comes inside, so your kids can get creative with your doll’s character and their story.

What’s so cute is that they come in large size and mini and each doll comes with a little pet inside. My daughter loves playing with the big dolls and mini’s together.

How many Lalaloopsy Dolls are there?

One of the fun things about Lalaloopsy dolls is the fun variety of characters you can collect. They all have the classic woolen hair and button eyes, but have unique personalities of their own.

There have been many Lalaloopsy dolls in the past releases, but this August we get to see new dolls join the crew.

The new collection will have 25 characters in all to collect with their own unique playset box. You can connect all their fences and playsets to create your own Lalaloopsy Land!

My daughter loved the character she got to preview, Dot Starlight! She was excited that this doll liked space and science just like her… and her playset reflected this too, how fun!

The Lalaloopsy pets are super cute and just add to the creative play.

Unboxing your new Lalaloopsy dolls is so much fun! On the back of our playset there was a little rocket house we got to build for the Lalaloopsy pets. It attached to the side of her house that her doll came in.

Are Lalaloopsy dolls coming back in 2021?

Yes! Fans loved Lalaloopsy dolls so much that they demanded to #bringbacklalaloopsy.

It’s been a while since the last Lalaloopsy release, but now you can Lalabrate their return to stores this August with old favorite Lalaloopsy characters and some new friends too.

Lalaloopsy dolls will be available at Walmart, Amazon, Target and other toy retailers starting on August 3rd!

Where can I watch Lalaloopsy movies and shows?

One of our favorite things about Lalaloopsy are the cute movies and shows. I used to watch these with my little girl on Netflix when she was 3 and she is still in love with them today!

Luckily there are a lot of different ways you can watch both new and old Lalaloopsy videos with your little ones at home:

Did you see that a new Lalaloopsy original show is coming out this month!?

We are so excited to see the new Lalaloopsy original show on YouTube! Tell us about your child’s favorite Lalaloopsy show or movie in the comments below!

What We Love about Lalaloopsy!

There really is so much to love about Lalaloopsy Dolls as a parent. I love helping my daughter collect these cute dolls.

You can learn more about Lalaloopsy dolls and shows HERE!

Do your kids love Lalaloopsy as much as mine? Tell me about their favorite character in the comments below!

Samantha Ramos has her B.A. in Special Education. She is a stay at home mom and homeschooler to 3 children in Southern California. Her biggest passion is positive parenting and helping moms find simple solutions to every day mom problems!

Hi, I’m Sammy, a So. CA area work at home mom of three. I love that I get to use my BA in Special Education to homeschool my kids and offer more valuable parenting tips to my readers. I’m passionate about being a stay at home mom and helping other moms find simple, stress free solutions for family fun, positive parenting, travel, and food.